Defying the Odds in a Risky Era for Unions and Journalists 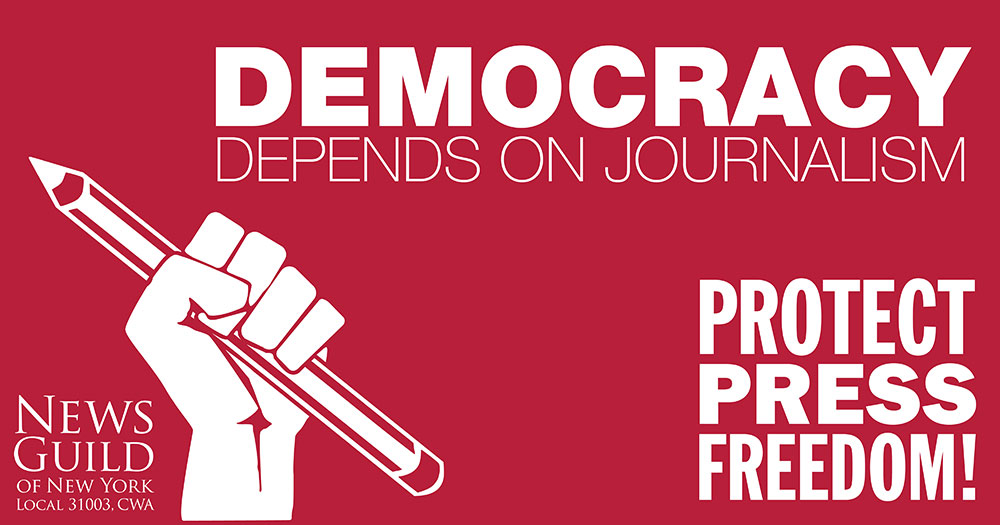 By Grant Glickson
President, The NewsGuild of New York

My new role leading The NewsGuild of New York couldn’t come at a more challenging time for unions or journalists. We are both.

In reality, it is a challenging, even perilous, time for anyone who cares about workers’ rights or the First Amendment. In other words, for all of us.

Every level of our federal government and many statehouses are now in the hands of people who have dreamed of having the political power to gut unions, weaken job safety rules and block efforts to raise the minimum wage.

Our country’s new president sent his press secretary to the podium last weekend to berate and threaten journalists, fanning the anti-media flames of his campaign. The dangerous rhetoric has poisoned the public’s faith in a free and independent press, the lifeblood of our democracy and the livelihood of the media workers we proudly represent.

Guild members and other journalists nationwide have faced obscene and racist trolling online, threats of violence, attempts to assault and intimidate, and some have even been arrested, including six journalists covering protests on inauguration day. The Obama administration was no champion of press freedom, threatening journalists with contempt while prosecuting whistle-blowing sources. Now people even more hostile to the media are in charge.

Hating the press and union-bashing are time-honored pastimes for many Americans. We have generations of experience fighting these battles and surviving, even thriving. What’s different now is the elevated level of vitriol, and the political power to turn it into policy and law.

But there is also power in numbers, as more than 3 million marchers nationwide demonstrated Jan. 21, pushing against an agenda that includes repealing Obamacare and inflicting other pain on working families. There are even allies in other, unlikely, corners: Americans on both sides of the political divide care about workers’ rights even if they don’t like unions. And they care about the First Amendment even if they don’t like “the media.”

The labor movement and the press are survivors. No matter how much opposition we’ve faced, we are still here. As unions, we are still organizing and educating and building networks of solidarity, even among non-traditional allies. And journalists are still overcoming whatever obstacles get in the way of investigating, reporting and publishing stories that hold government to account.

The Guild began as a “union of reporters” more than 80 years ago. Today we represent a wide variety of media workers in newsrooms, advertising, circulation and other areas of traditional and digital publishing. We also have members in outside fields, including English as a second language teachers at Kaplan International and workers who staff and supply Hudson News stores at the city’s commuter transit hubs.  Where our Hudson shops have added Dunkin’ Donut counters, we represent those workers, too – possibly the only unionized workers at a U.S. fast food chain.

As a union, we have a sacred responsibility to all our members, in the news media and beyond, to zealously protect their rights, from the bargaining table to the halls of Congress.

The NewsGuild of New York will be more vigilant than ever, along with millions of other Americans who share our values. Together we have the power to fight back and win.