Guild counsel Hanan Kolko reads names from the back of ballot-bearing envelopes as elections committee members verify their legitimacy early in the vote-counting process on Nov. 13. El Diario Unit Chair Oscar Hernandez, an election observer for the Proven Guild Leaders slate, is at right.

One-quarter of ballots sent in

Guild President Bill O’Meara and Secretary-Treasurer Peter Szekely were narrowly re-elected on Thursday to new three-year terms in the first contested election at the Newspaper Guild of New York in 31 years.

After the counting of mail-in ballots ran from Wednesday night into the early morning hours of Thursday, O’Meara and Szekely each emerged with about 53 percent of the votes in their respective races. O’Meara won over New York Times Unit Chair Grant Glickson by 328 to 294, while Szekely won over Tony Barone, a Reuters shop steward, by 320 to 289. The new term begins on Jan. 2, 2014. 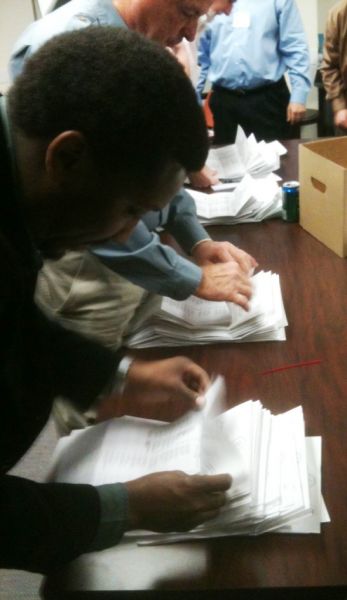 All but one of the candidates running with O’Meara and Szekely on the Proven Guild Leaders slate also were elected, including Local Chairperson Karen Rohan of Foreign Policy Association. The only candidate running with Glickson and Barone on the Members First slate to be elected was Mindy Matthews, grievance chair at The Times, who will assume one of the 16 seats on the Executive Committee.

In sheer numbers, the biggest turnout was from The Times, the local’s biggest unit, which accounted for more than one-third of the total number of votes cast. Thomson Reuters, a unit of slightly more than 400 members where Szekely spent most of his working life, accounted for about one-fifth of the turnout. The local has units at 19 employers in all.

The election, including ballot counting (pictured) which began Wednesday evening, was overseen by Guild outside Counsel Hanan Kolko and a five-member Local Elections Committee, which had been put in place just before nominations were made last month.

Of more than 2,870 ballots mailed on Oct. 29 to members’ homes, 697, slightly less than one-quarter of the total, were collected late Wednesday afternoon from a Guild Post Office box. But 63 of the ballots were disqualified, mostly because the pre-paid outer envelope was unsigned or the ballot was not placed in a blank envelope inside the outer envelope, as the election rules require.

O’Meara, a former news writer at WPIX who has been a rep and officer at the Guild for 25 years, and Szekely, a former Reuters correspondent and unit chair, assumed their respective offices in June 2007 without opposition.

The last time there was a contest for both of the local’s top two officers was 31 years ago, when Executive Vice President Ed Egan (whose position then was the equivalent of the local’s current president) defeated Betsy Wade of The Times, and Secretary-Treasurer Barry Lipton defeated Joy Cook of the New York Post. Earlier that year, there also was a contested election for the other positions on the Executive Council.

Full results of the election are as follows: