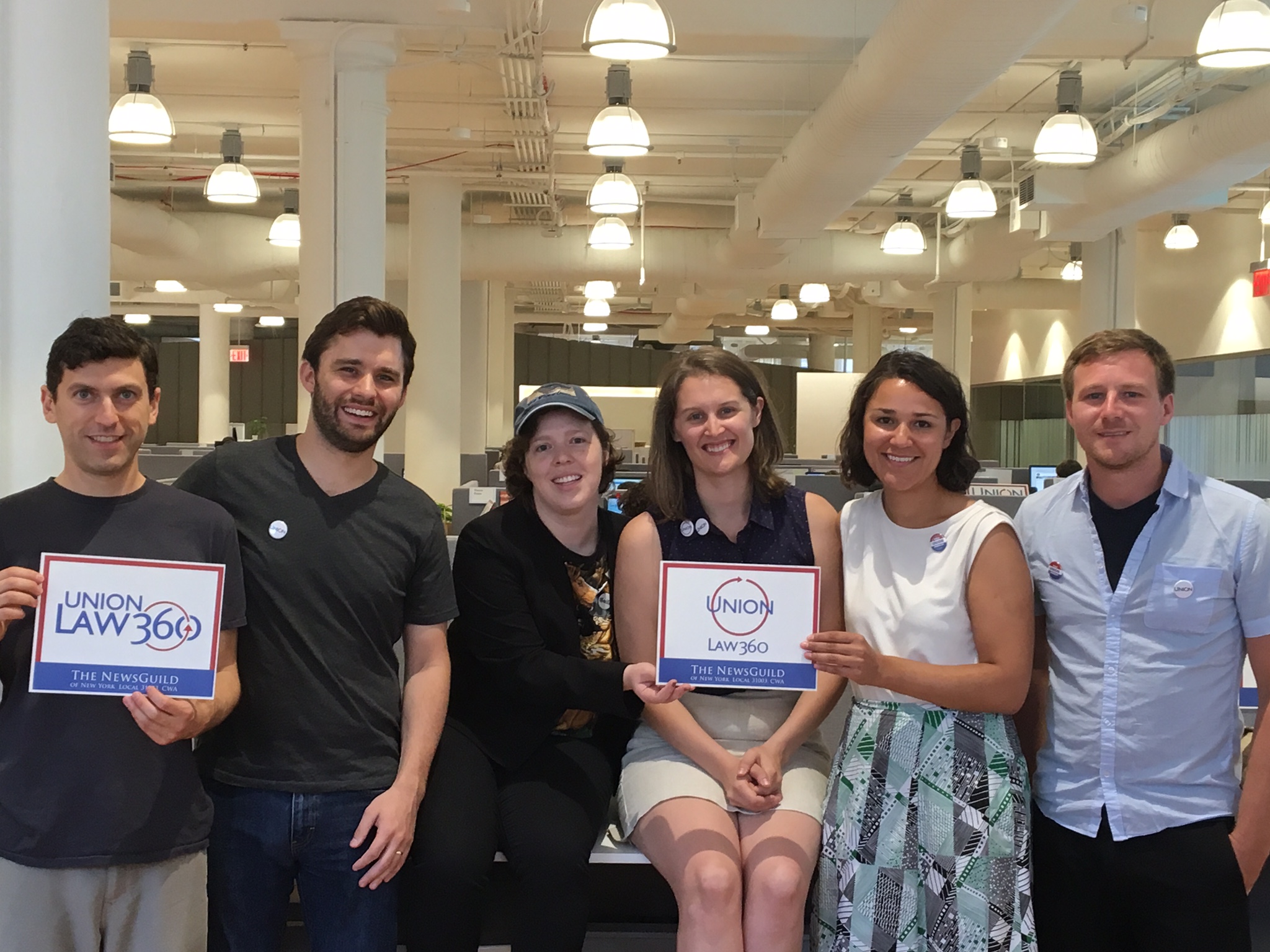 LAW360 EDITORIAL STAFF ORGANIZES WITH THE NEWSGUILD OF NEW YORK

NEW YORK, July 19 – The editorial staff of legal news website Law360 on Tuesday petitioned for union representation with The NewsGuild of New York with the goal of improving management and editorial practices and ensuring that employees share in the company’s continued growth.

An overwhelming majority of the roughly 130 reporters, editors, and news assistants and apprentices at Law360 across the United States have signed on to the drive for Guild representation. They called on management to voluntarily recognize their union. Law360 is owned by LexisNexis Group, a subsidiary of RELX Group [NYSE: RELX, RENX].

“We are excited to welcome this talented group of legal journalists to our union, and we call on Law360 to recognize the will of the majority of its editorial employees to have union representation,” said Peter Szekely, president of The NewsGuild of New York. “Their dedication to improving their workplace advances the Guild’s longstanding mission to advocate for journalists, improve their working conditions and fight for industry-wide standards.”

Law360 is a fast-growing publisher of legal news and analysis. Despite the company’s growth, employee compensation lags behind competitors, and editorial staffers have questioned Law360’s overtime practices, strict story quotas and a general lack of transparency in the workplace.

Law360’s editorial staff began organizing soon after management enforced a non-compete agreement against a recently departed employee. As part of a recent settlement with New York Attorney General Eric T. Schneiderman, which stemmed from an investigation initiated by The NewsGuild, the company has discontinued its practice of requiring employees to sign non-compete agreements, which had restricted their ability to find other jobs.

“We are proud of the work we do at Law360,” the organizing committee said in a statement. "We want to see the company continue to grow and thrive, and we believe we deserve to grow and thrive with it. As editorial staffers, we deserve to have our contributions recognized and to have a voice in the newsroom. The only way for that to happen is for us to organize collectively.”

Mission statement from the Organizing Committee:

“Law360 has become an indispensable news source for the legal and business communities, and we, the journalists, are proud of the instrumental role we’ve played in driving the company’s constant and remarkable growth.

However, this success has not led to better working conditions for those in the newsroom, and the editorial staff of Law360 believe the time has come to unite and ensure that our voices are heard.

Together, Law360’s talented pool of reporters, copy editors, news assistants, third-party content editors and graphics editors are seeking reasonable compensation and overtime pay. We also stand against unilateral changes to our healthcare and other benefits, a mercurial management style, and an overwhelming quota-based workload that leads to a poor work-life balance and questionable editorial priorities.

That’s why Law360’s editorial workers are seeking to unionize with the NewsGuild of New York. We believe collective bargaining is the most effective way to sustain a company where journalists can focus on quality reporting, confident that their interests are adequately represented.

The vast majority of Law360’s editorial staff from around the country support this effort to address our concerns collectively. We ask management to recognize this union and engage with us in constructive and amicable negotiations.”