A transformation is underway in our union. We are moving away from the business-as-usual servicing model that has come to dominate the labor movement over the past 70 years, much to the benefit of employers, and toward the organizing model that gives workers real power in the workplace. These two approaches stem from different conceptions about where our power lies. The service model views the union as a vending machine, where someone puts their dues in and expects to get a grievance or contract out. But the organizing model is rooted in the understanding that our real power comes through unity and collective action. If we want to settle big grievances or win a strong contract, then we have to be willing to fight together to win it.In several Guild units, our shift to the organizing model is demonstrating that when we unite and take action, we win! Here are two examples of how NYGuild members are doing just that.Seniority Win at Sports IllustratedNYGuild members at Sports Illustrated (SI) are currently bargaining a first contract with Maven Group, a digital media conglomerate, which acquired the rights to publish the magazine from Authentic Brands Group in 2019. Maven refused to recognize the basic principle of seniority—arguing that it did not matter how long someone had been working at SI prior to the Maven era. The company would only recognize and value time served since their date of purchase.The SI Union, composed of the staffers who write, edit, fact-check, design, produce and photograph award-winning journalism, were outraged by Maven’s proposal. So they took action.On May 25, the union released a letter signed by more than 90% of the members in the unit demanding that Maven recognize their loyalty and experience. They tweeted a thread about their demand with an image of the letter with signatures—members then retweeted the image and shared their years of service. 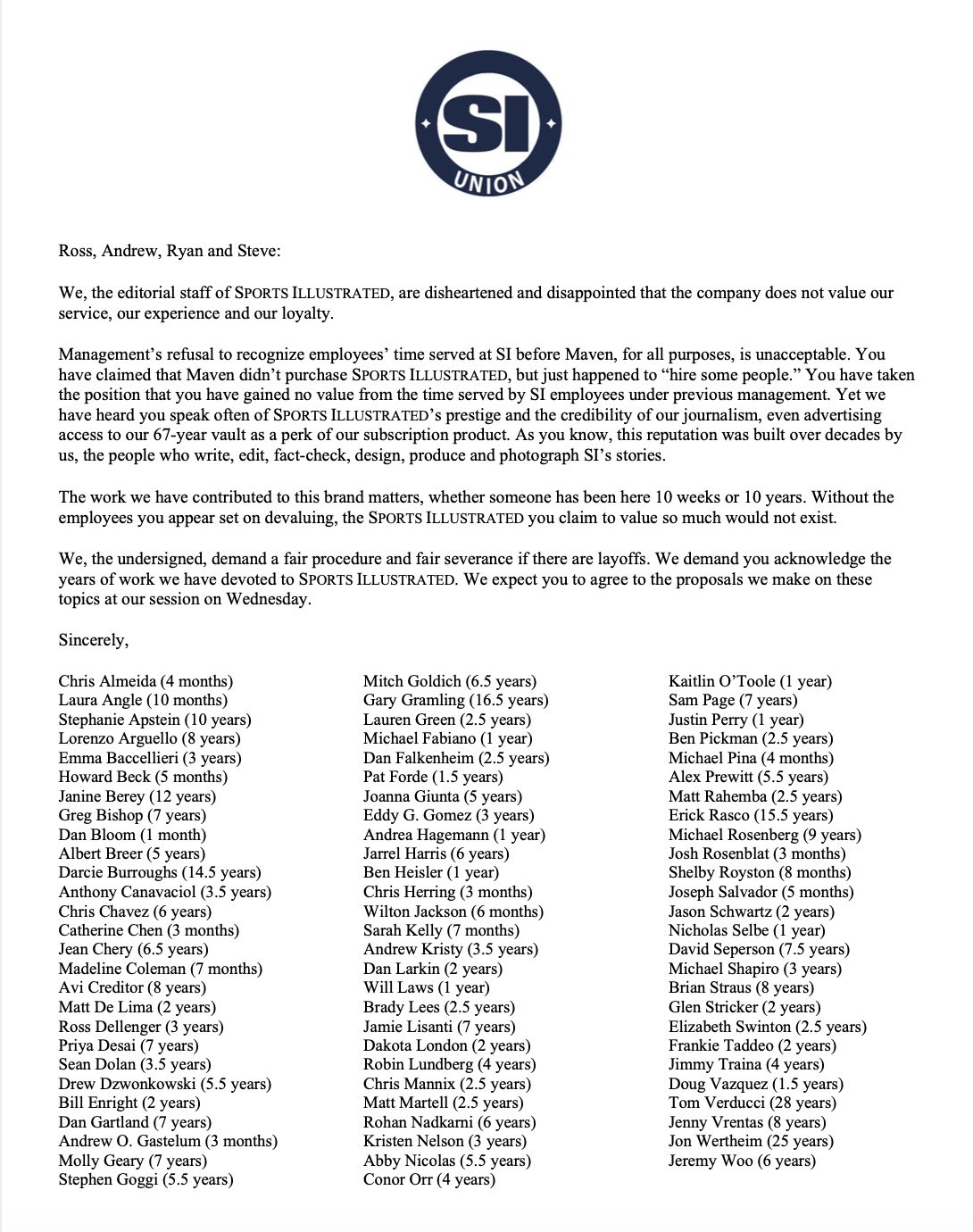 Within three weeks of taking this public action, our members won recognition of seniority and Maven backed off its bargaining position. The unit still has a way to go to win the first contract, but they are one step closer to building the kind of power they need. Merit Pay at MeredithIn May the Meredith Union—comprised of media workers who make People Magazine, People TV, Entertainment Weekly, Shape Magazine, and Martha Stewart Living—filed an unfair labor practice charge (ULP) against their employer, Meredith Corp. The company unlawfully denied newly unionized employees annual raises in retaliation for organizing. But the Meredith Union didn’t just rely on legal action to address the problem—they super-charged the ULP with collective action. Over 80% of the members across all five shops signed a public letter demanding that the employer provide them the raises now. In less than two weeks, the company capitulated and restored an across-the-board 2% raise to all employees in the newly unionized shops, retroactive to the date the company was supposed to pay the increase. Galvanized by the success of their collective action, Meredith Union is now preparing to bargain a strong first contract. 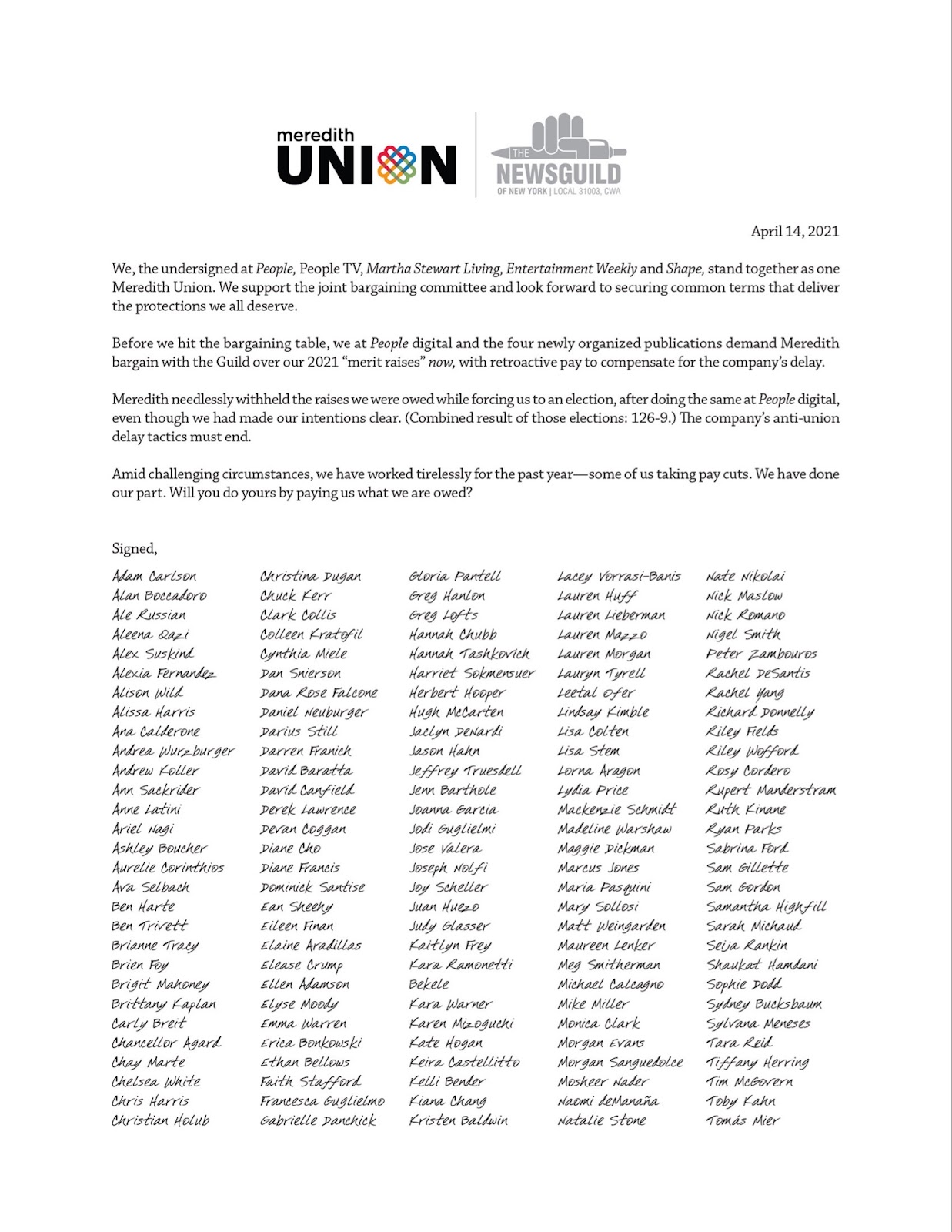 Escalation WorksWe believe in the organizing model because we know that employers act only for their own benefit. The raises we win and the contracts we accomplish are a direct reflection of the amount of power we build on the job through collective action. Strategic, effective escalating actions that turn up the heat on the boss while unifying our membership build our confidence to act collectively. This increases member participation and engagement and allows us to make credible strike threats in support of bold bargaining demands. Our ultimate goal, as a union, is to improve the working lives of ourselves and our colleagues. We are transforming our workplaces and building power one escalating, collective action at a time. I want each and every one of you to experience what it feels like to have that power in your workplace. This is the beginning of a worthwhile and necessary evolution of our union—the fight for a voice in our workplaces starts here.Susan DeCarava
President, NewsGuild of New York
August 3, 2021